In the Sydney region, where the industry first began and is still concentrated, the main centres of flower production are the Hills District, Horsley Park - Leppington and the Central Coast. Other production centres include the coastal strip from north coast right down to the far south coast, the Southern Highlands and inland area around Mildura.

In the Sydney region, the climate enables a wide range of flower crops to be grown. Most growers produce more than one type of flower crop. Species grown for their flowers and foliage include a very wide range of traditional flowers like roses, carnations, chrysanthemums and other crops like gerberas, lilies, asters, statice, freesias, poppies, baby's breath and alstromeria. Australian native species like waratah, kangaroo paw and NSW Christmas bush as well as assorted proteas (native to South Africa) are also grown. Growers tend to specialise in either traditional crops or natives/proteas.

Unlike many other horticultural crops, demand for fresh flowers is related to fashion trends. Proximity to Sydney's huge population allows the industry to cater for a broad range of clients. Our growing multicultural population has seen an increased use of flowers for festive occasions like Chinese New Year and Orthodox Easter celebrations. Fresh Flowers play a unique role in our lives, both in celebration and sorrow. They are a gift for most occasions from a "thank you", "thinking of you", "sorry" and "congratulations" to "I love you".

New flower lines and cultivars are being introduced all the time, be it new colours or shapes of traditional flowers like roses and chrysanthemums or new crops like flannel flower. Other lines are associated with a particular season like stock for winter and spring and berries for autumn.

Commercial flower growing is a labour intensive and technically challenging business. The industry has an important role in providing employment and recycles waste products from other industries like poultry, dairy and mushroom production. About one third of crops are now grown in greenhouses while the balance is field grown. In recent years, growers have invested in new growing technologies. These include greenhouses with associated climate control, new growing media, and hydroponic systems (soil less culture). Many growers produce technically more challenging crops like lisianthus and lilies or cultivate chrysanthemum and bulb crops out of season. Postharvest treatments are used to extend the vase life of many species.

Most of the flowers produced are sold in the Sydney Flower Market. There are also several major fresh flower exporters located in Sydney and nearby. A number of growers produce exclusively for the export market, targeting growing markets in Japan, South East Asia and North America.

The industry is well supported with specialist training in Horticulture and Floristry offered at several tertiary institutions in the Sydney region. 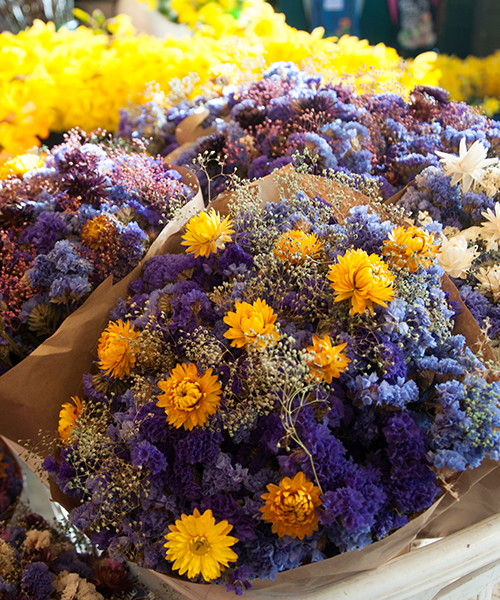