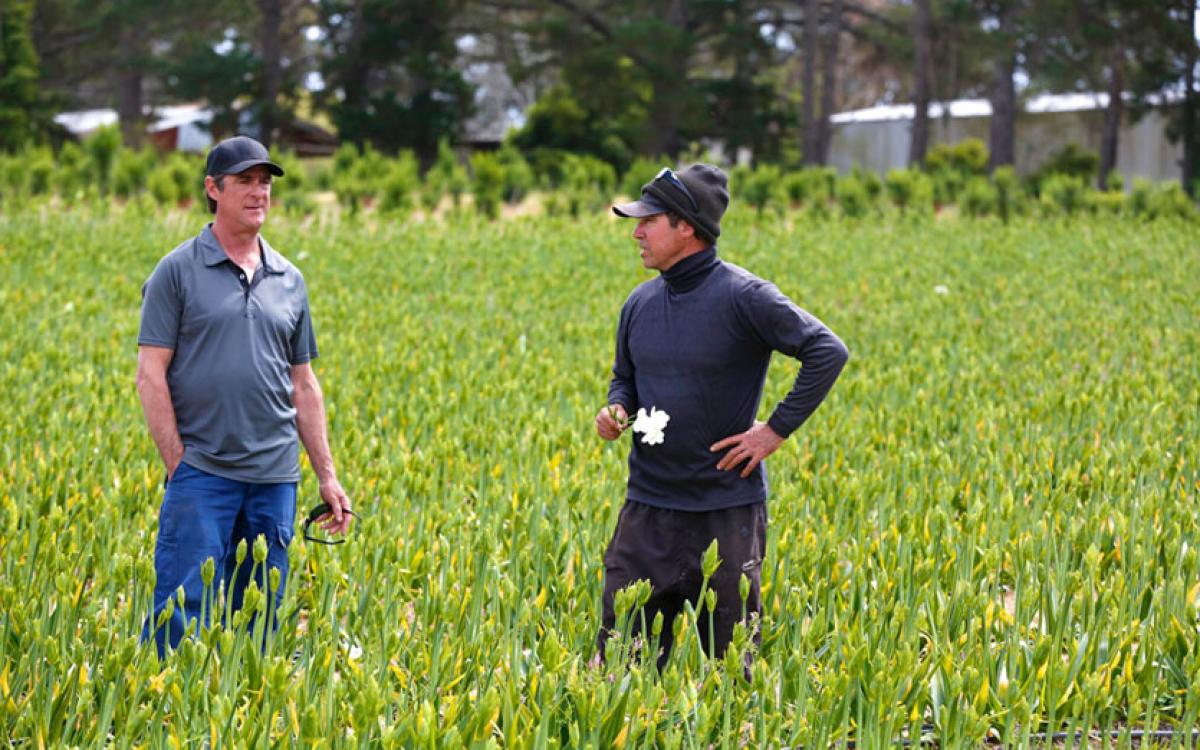 There is a sense of deep pride in Sam Dominello’s voice when he talks about seeing his grandchildren run around the packing shed of his farm in the same way his own kids used to. When he went into partnership with his brother Phil 37 years ago, they were continuing a family tradition. As third generation family farmers, they at first rented their farm in Peats Ridge (about one and a half hours out of Sydney) and began growing vegetables with a few flowers on the side - just as their Dad had always done.

“We were actually quite fortunate in the sense that when we first built the greenhouses it rained and rained and rained, and flowers were scarce because we weren’t importing much in those days. We had a greenhouse full of carnations and thought ‘well, we’ll build another one.” They decided to start growing flowers exclusively and never looked back. What began as six greenhouses, has expanded over the years into a 95-acre farm that hosts 4 hectares of greenhouses to cater for year-round demand for lilies, freesias and lisianthus. Their crowning achievement was being named Flower Grower of the Year for the last two years as part of the Sydney Markets’ Fresh Awards. 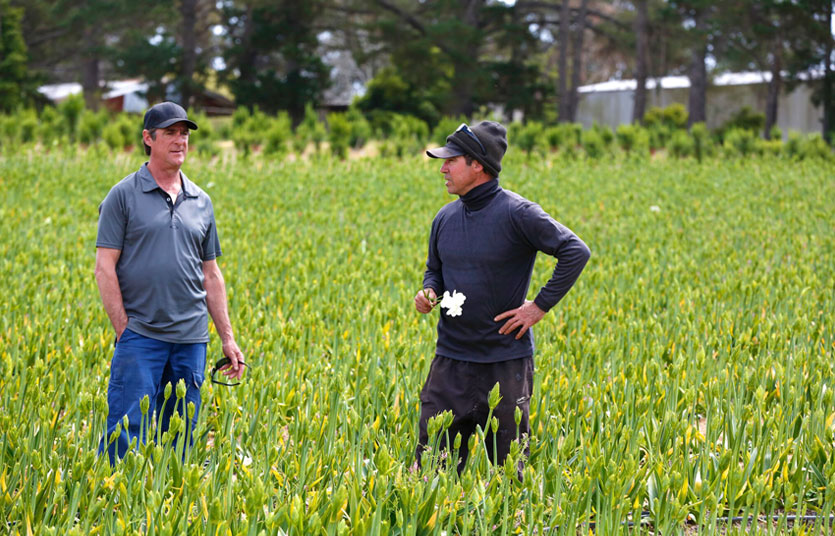 Sam and Phil Dominello amongst the chincherinchee on their Central Coast farm.

It's a family thing

Walking through this true family farm, you see first hand the strong bonds between the family members that make this enterprise a success. Everybody pitches in at some point. In the early days, the brothers fell into an easy pattern of Phil working the farm and Sam taking everything to the markets. Sam admits: “We’ve never had a fight, but sometimes we don’t talk to each other for a day or two!” After the years of 1 am starts finally caught up with Sam, sister Vicky took over the running of the market stall. Although not all the children are keen on taking up the family business, Phil’s daughter Jessica is learning the reigns of the Sydney Flower Markets trade. The giant cool room door in the packing shed has the story of the family writ large. The heights of the children and grandchildren of the farm have been recorded in permanent marker, as well as important dates and family achievements. It tells the story of a family dedicated to the hard work of farming and to each other. Sam said he wanted to paint over it a few years ago, but was howled down by the rest of his clan. 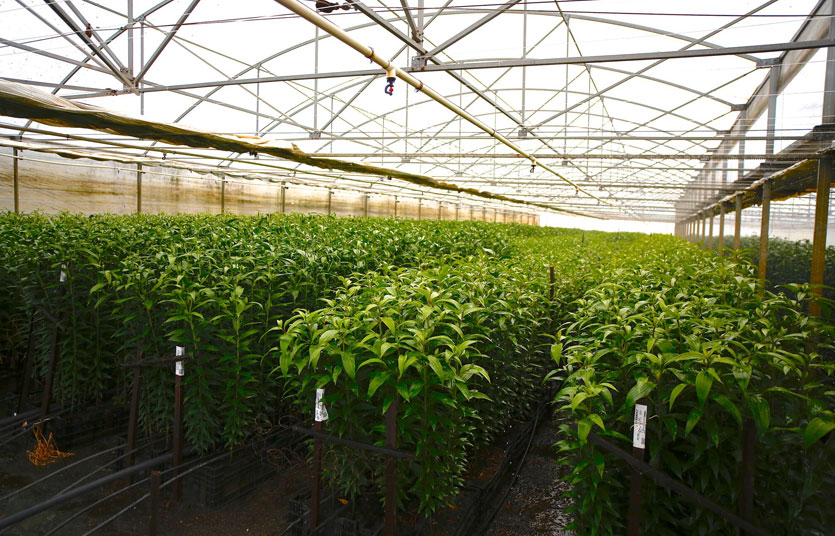 Over 37 years, the brothers have perfected the art of growing lilies year round.

Lilies are the mainstay of their business. The brothers grow many types and colours, including brand new varieties like the rose lily with a spectacular, double flower and no stamen. They also grow calla lilies, which have been very popular in 2017. While lilies are the perennial favourite, S and P Dominello also grow a multitude of different coloured freesias that last from January until September as well as lisianthus and (for a short season from the last week of September) chincherinchee. It’s a tight operation with a daunting schedule of planting, picking and packing to cater for high demand days. 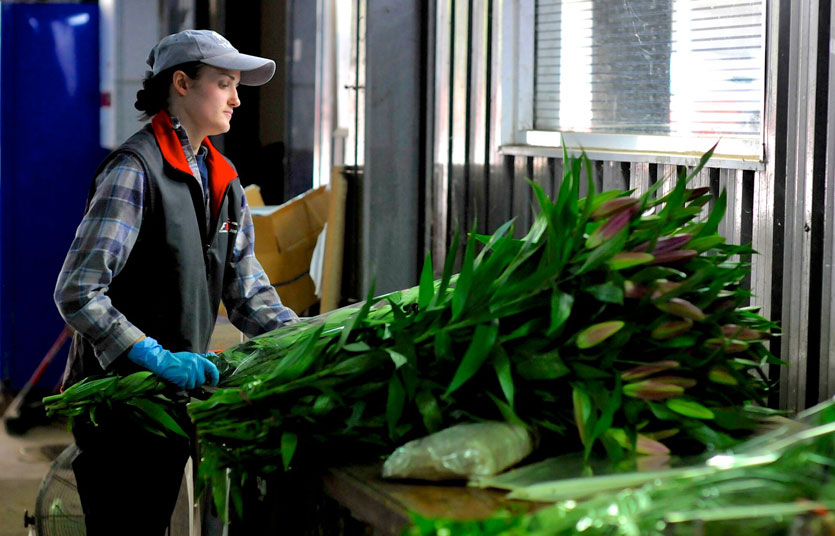 Jessica Dominello has taken up the family business as part of the team selling their flowers to florists at the Sydney Flower Markets.

Innovation might be a bit of a buzzword at the moment, but this family embodies the spirit behind the word. Despite the fact that Sam left school at 15, he is deeply curious and enthusiastic about studying. He explains it simply: “Flower growing is my passion and interest”. The brothers were early adopters of computer technology to assist their farming and are committed to reducing pesticide use through biological controls. They even use an industrial-scale worm farm, from which they harvest a “worm-tea” to use as a fertiliser  This dedication to practical research results in a high-quality product and keeps this family farm at the head of the horticultural pack. 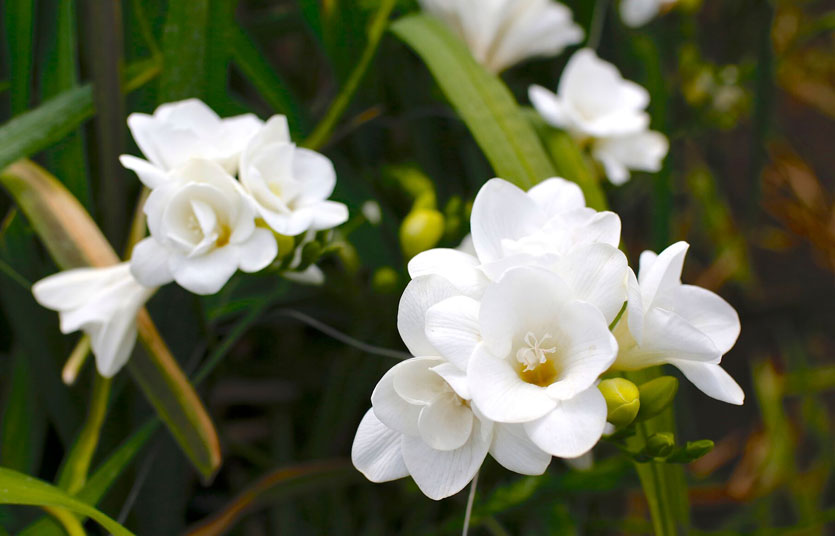